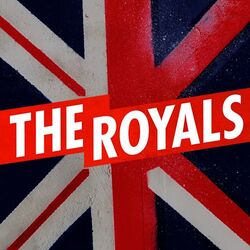 The Royals is a television drama series that premiered on E! on March 15, 2015. It was created by Mark Schwahn and is the network's first scripted series.

Queen Helena is the matriarch of a fictional contemporary British royal family who must struggle with both common and atypical family dramas while in the public eye.

Vincent Regan as King Simon (1, recurring 2,3)
the King of England

Genevieve Gaunt as Wilhelmina Henstridge (recurring 2, 3–)
Liam's friend and confidante, who has feelings for him

In April 2013, E! announced several scripted projects it had in development, including The Royals, a " contemporary family ensemble is steeped in all of the regal opulence of the British Monarchy and framed by Shakespeare’s Hamlet." Deadline.com reported in June 2013 that E! would be producing pilots for The Royals and another series named Songbyrd, which would be the network's first scripted pilots to date. In September 2013, Hurley was cast in the leading role of Queen Helena. Soon after, Moseley was cast as Helena's son Liam, followed by Park as Liam's twin sister Eleanor and Merritt Patterson as his love interest, Ophelia. The Royals was picked up for series in March 2014, to be shot in the United Kingdom and scheduled to debut in 2015. In June 2014, Merritt Patterson was added to the cast to replace Richardson as Ophelia, and shooting for the first season began in London. In August 2014, E! released its first promotional trailer for The Royals, and People reported that Joan Collins would guest star as the Grand Duchess of Oxford, Helena's mother. The first season will consist of ten episodes.

In December 2014, E! announced that the series would premiere on March 15, 2015. The network later announced at the Television Critics Association press tour on January 15, 2015 that the series had been renewed for a second season, two months before its debut. E!'s Executive Vice President of Original Programming & Development Jeff Olde noted that production for season two would begin in London in spring 2015.

The production uses Blenheim Palace as its fictional royal palace.

Creator Schwahn said of The Royals, "It's a family drama. It's about a family, and it just happens to be a royal family ... not the royal family." Hurley called the series "a very nice combination of what the public sees and what the public will never see." Schwahn talked about his concept:

I just thought it would be really interesting to take a look behind the curtain ... Who are these people? What do they want? What will they do to get it? I thought it was really fascinating and a great idea for the foundation of a story.

Schwahn said of Hurley, "I tell her every day that this was the role that she was meant to play ... she has found her lot in life" Of her character, Hurley commented "this queen is very matriarchal ... she has a lot of power and I think she knows how to use it." She noted, however, that "there's no correlation at all between Her Majesty Queen Elizabeth and my Queen Helena... If Princess Diana [sic], for example, had become queen of England, that would be a more similar age group." Hurley later said that the character of Helena was inspired by Diana, but "some of it we picked from Cruella de Vil, the Disney character." Noting that "most of the characters on The Royals are going to be walking a fine line between 'good' and 'bad'," Schwahn said:

Elizabeth has been very brave in approaching the more villainous aspects of the character ... I was working with Elizabeth on wardrobe and she asked, 'Why not add in bits of fur? I think the queen should wear bits of cruelty once in a while.'

Regan said of his character, the "soft-spoken" King Simon: "He's coping with a great deal of grief for the loss of his eldest son, Robert ... He's coping with that and trying to work out how the royal family can exist in the world they're now in." Moseley commented on his own storyline as playboy Prince Liam, "it's like (if) Prince Harry was thrown into being the next King of England [sic]." "He basically is sort of a rebel ... doesn't really care what anybody thinks, does whatever he wants to do, when he wants to do it," he later added. Park said of her wild Princess Eleanor, "she's young and trying to find where her place is in the world. She's a party girl."

In January 2015, Collins commented on the public anticipation for The Royals, saying “I know there’s been a lot of excitement about it in the British press." Hurley suggested that fans of Dynasty and Gossip Girl would enjoy the series.

Prior to the show's debut, The Sydney Morning Herald called The Royals "possibly the worst show in the history of TV", criticizing it as "a bunch of bed-hopping halfwits saddled with ... very, very lousy dialogue". Sydney Bucksbaum of E! Online wrote, "There's nothing more hilarious than watching the Queen of England say 'FML!'"

In March 2015, a viral video of a naked man climbing out a window of Buckingham Palace on a bedsheet during the changing of the Queen's Guard, presumed to be a hoax, was publicized internationally by a variety of sources including Cosmopolitan and the Daily Mail. The video turned out to be a publicity stunt to promote The Royals via the show's own fictional tabloid, D-Throned.