The Serpent That Did Sting Thy Father's Life

11
Prudence was one of The Royal Family's maids and is the mother to Cyrus Henstridge's son, planned to be the heir to the throne.

Prudence appears sweet and shy but has a hidden darkness. She is a victim of rape by Prince Cyrus, who threatened to fire her if she did not perform a certain sexual act on him. Not being able to go without benefits, Prudence was forced to do so. Later, during the masquerade ball at the Palace, Cyrus hosts a sex party to convince prominent individuals to vote to keep the monarchy. He tells Prudence to go and wait for him in his bedroom, where she pours both of them a glass of wine and poisons Cyrus' glass. When he arrives, Cyrus tells her that the Palace has security cameras everywhere, he knows that she is trying to kill him, and that he will send her to prison for treason. However, if Prudence works with Cyrus to spy on the King (find out where King Simon goes on his walks) then he won't send her to prison. She agrees, and Cyrus continues his coercive sexual relationship with her.

Prudence has been shown to be good friends with King Simon after they had bonded when Simon offered to help her prepare the food for the garden party.

After being raped yet again by Cyrus, she soon becomes pregnant with his child, but proposes a solution: to have her son become the heir to the throne after Cyrus. Cyrus agrees, and they become engaged, and Prudence gives birth to her son. However, Helena later destroys Cyrus's plan after finding out he ordered to kill Alistair Lacey, and Helena has Prudence disappear with her child. Exactly what happened to her and her son is unknown. 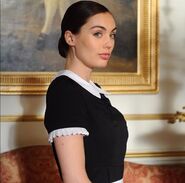 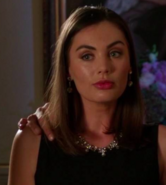