9
Princess Maribel Henstridge is a Princess of England and is currently fifth in line for the British crown but was second in line when her father was the King.

Maribel is the daughter of Veruca Popperwell and Cyrus Henstridge, the sister of Penelope Henstridge, the niece of Simon Henstridge and Helena Henstridge, and the cousin of Robert Henstridge, Liam Henstridge and Eleanor Henstridge. Maribel often sees Eleanor as the cooler older cousin and often idolize her and does what she says. Princess Maribel and her sister are described as "a little bit doopy". Princess Maribel is the best friend of her sister Penelope and they are shown to share a room and bunk beds of which she has the bottom one. Like most siblings, they don't always get along, but definitely have an obvious deep rooted love for each other. Unlike Penelope, she is described to be "extremely slutty". After Helena makes a deal with the anti-monarchist Nigel Moorefield, he dates both her and her sister Penelope.

Before she had plastic surgery, she had red hair and pale skin, just like her sister. After her surgery, though, she has the boobs „of Kate Upton“, skinnier waist and legs and „the butt of Kate Beckinsale“, she dyed her hair blonde and her complexion is darker than before; in addition, she had her voice made higher which makes her sound like a little girl.

Penelope & Maribel at the Garden Party in "Infants of the Spring" 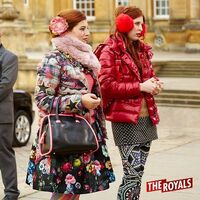 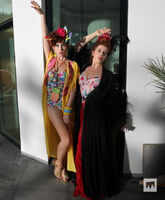