Helena Henstridge is the Dowager Queen of the United Kingdom, and the de-facto matriarch of the royal family.

Helena was not born into the Royal Family, but instead became a member by marrying Simon Henstridge, the King of England. During her marriage, she gave birth to three children: her firstborn son Robert Henstridge, son Liam Henstridge and his twin, her daughter Eleanor Henstridge. But, it became clear that she didn't marry for love, but instead for wealth and power, so she had countless affairs with bodyguards and the "help". However, her biggest and most meaningful affair was with Alistair Lacey. Alistair is also the only man that Helena has shown sweet and kind emotions too, her being truly in love with him. Helena has never had a close relationship with her children leading them to dislike and hate her, especially by Princess Eleanor. Many may think that the Queen is a heartless woman but the truth is she is not the kind Queen England wants but the intelligent and stern ruler they need to continue to thrive above the rest.

Helena is somewhat of an antagonist at times. She is an iron-strong and stern ruler over the United Kingdom. And, despite being a great queen, she often has difficulty being a mother as she's not able to show any emotions, and puts the "queen" front up for her children and husband. When her firstborn child, Robert Henstridge was pronounced dead, Helena was very distraught but kept her emotions in check, realizing she had a country to keep together.

Helena Henstridge has a slender build and is an attractive mother of three. She has long golden brown hair (with curls at the bottom) which passes shoulder length. Helena also has beautiful blue eyes which often is shadowed by makeup. Her usual wardrobe consists of clothes that show off the curves of her body and regal colours such as black, gold, red and purple. 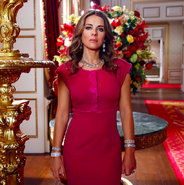